Why it’s important to do a worm count

Related article – Worm Counts, What are they and why do i need one?

Many pet owners want to know if their dog or cat has worms but don’t want to worm their pet for the sake of it. This is understandable given how toxic spot-on wormers (and flea treatments) can be, and the detrimental effect they can have on pets, and the environment as a result.

To add to the downside, parasites such as worms, and fleas, are becoming more resistant to these strong pesticides. With all that in mind, why would you worm your dog or cat just for the sake of it if you don’t know they have worms in the first place?

Well, a lot of pet owners especially those who raw feed, worm naturally, or don’t worm their pets at all, regularly worm count instead. So a dog or cat only needs worming if they test positive.

A dog worm count or a cat worm count is a simple test that looks for worm eggs in your pet’s intestines. If detected then your dog or cat has worms and needs treating accordingly.

How to do a worm test

Essentially, you buy a worm count kit from Brown’s and use it to collect a sample of your dog or cat’s poo. Post the sample to the lab and they’ll test it for worms and giardia. There is a separate test for lungworm which tests for larvae, not eggs, and you need a different kit for it The results are emailed to you with any recommendations for treatment if any is needed. 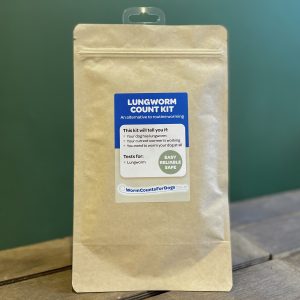 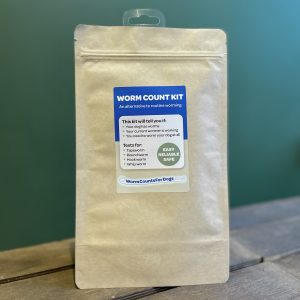 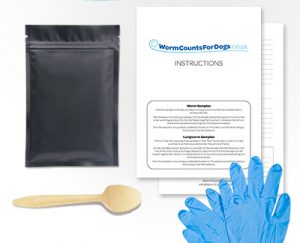 What’s in the kit?

Our kits are now eco-friendly – every poo bag and sealed collection bags are compostable. No more plastic, or unrecyclable paper.

Each kit contains strong poo bags; pick up a poo with the bag as you would ordinarily. Tie it up and put it into the compostable bag, then put that bag into the last bag (think Russian doll!) This is to make sure there are three barriers between the poo and the outside world, to keep it safe and protect the postie.

Write your details on the enclosed form so we know where to send the results and put the lot into the Freepost bag back to the lab. That’s it. Your job is done and the lab will email your results to you within a few days.

You can make a decision to worm or not based on the results.

You will not get any poo on you!

Don’t wait for the external signs your dogs may have worms because the worm burden by then will be significant. However…

Signs your dog may have worms:

The benefits of doing a worm count.

You should consider testing for worms:

Which worms are tested for?

There are two types of tests depending on what’s being tested for – a worm count, and a lungworm/heartworm screen.

The worm egg kit tests for eggs, whereas the lungworm screen tests for larvae and takes longer.

The worm egg count tests for:

The lungworm kit tests for:

Lungworm is particularly nasty, difficult to treat if left undetected, and on the increase in the UK.

To cover all your bases we recommend doing the two tests together – worm, and lungworm at the same time.

How often should you test for worms?

It’s recommended to test four times a year, every three months. If you routinely worm your dog wait a minimum of 14 days before doing a wormcount or lungworm screen to allow for a reliable result.

Related article – Worm Counts, What are they and why do i need one?